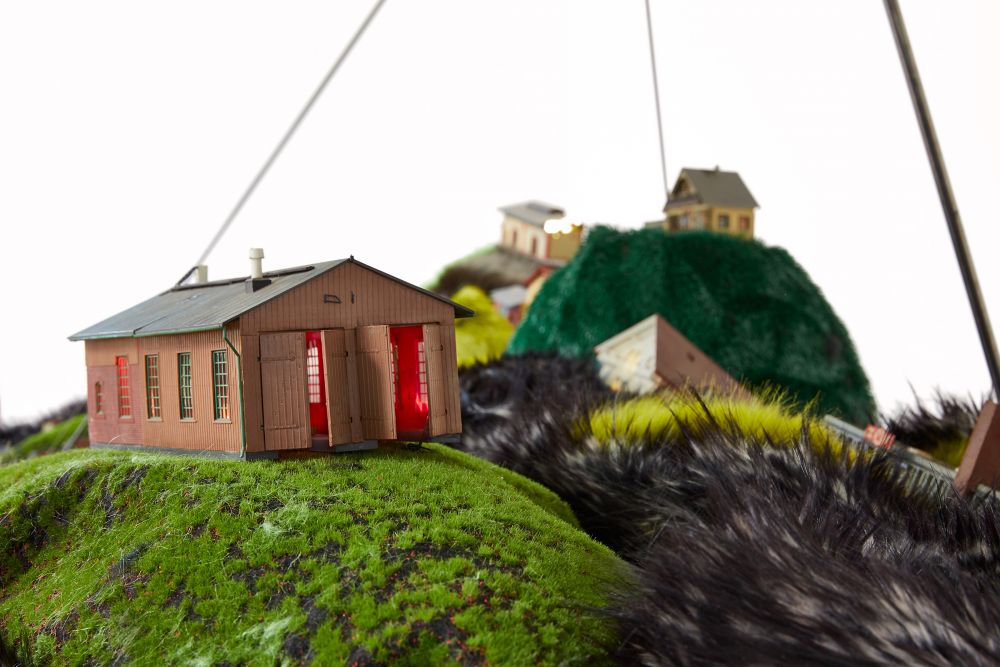 Film projections conquer billboards, window and door frames, art spaces remain closed yet become transparent, installations conquer outdoor spaces or occupy niches in buildings – for Made in Potsdam, fabrik Potsdam, and Kunstraum are thus presenting artists from Potsdam and the region in surprising formats, some of them with new visual languages and unexpected media.

These works of art can be discovered on a stroll through the Schiffbauergasse and be experienced open air.

The gallery Kunstraum offers Potsdam artists with an individual perspective on their hometown in their technique and form of expression, an arena for regional positions. The artists have the chance to stage a show with their newly created works and to conquer the space. The artists Jeanette Niebelschütz and Kim Konrad have been working in the spaces of Kunstraum since December 1, 2020. They interpret Transit as a momentary state. Out of isolation in the shadow of heavy time. The change of location from the studio to spacious visual axes is an opportunity to reinterpret the perspective, repertoire, and format of their works. No restrictions, but free development in playful and humorous collaboration. To them, art in progress means exchange, correction, impulse in the battle of respectful liveliness.

JEANETTE NIEBELSCHÜTZ was born in 1960 in Potsdam. At 18 she completed an apprenticeship as a window dresser. During this time, she had her first contact with the fine arts. Painting, screen printing, textile design. From 1996 to 2006 she worked as a art mediator. Subsequently, completed extensive work in various artistic fields. Since 2020 she is active as an artist again. She lives and works in Potsdam. www.jeanetteniebelschuetz.de

KIM KONRAD was born in 1963 in Berlin. At the age of 20, he was a professional football player and subsequently obtained a coaching licence. In 1999 he moved to Potsdam and became a bar owner. After 12 years he went to Spain for six years, where he got his start and inspiration for painting from the sea. He has been working as a freelance artist for 10 years. His materials are canvases, shuttering boards, oil paints, varnish, and acrylic. He lives and works in Potsdam.  www.kimkonrad.com

It is as if a bear were sleeping and people had built their houses on its fur. The  models of houses – remnants of the former model building boom in East and West Germany – rise and fall incessantly. Office buildings, factories, churches, refineries, half-timbered houses next to functional buildings, leading their own contemplative lives in quiet harmony on no less than two floors. Nothing, except their own fear, wants to believe that the bear would ever awaken.

Due to the current situation, Maren Strack and Johan Lorbeer showed a selection of their art and performance videos entitled Videos für Draußen (Videos for Outside) at knock hard Studio, Berlin in November and December 2020. The Videos für Draußen can now be seen at Made in Potsdam in two large showcases. The films show different works by the two artists that have been created over the last 30 years.

MAREN STRACK is a sculptor, performer, and musician. An important component of her performances is the use of different materials, e.g. steel plates, latex or Ytong stones. She tests the selected materials in terms of their choreographic usability and their sonic properties. www.maren-strack.de

JOHANN LORBEER focuses on perceptual phenomena in his performances. The situations he creates lie on the borderline between image and performance and are fascinating because of their apparent incompatibility with our spatial visual experiences. www.johanlorbeer.com

As Far As The Eye Can Hear, The Film
Film by Oscar Loeser & Martine Pisani (2014)

The film was created from As Far As The Eye Can Hear, a performance created by Martine Pisani for the outdoor space in 2010. Three men set off together for an unknown destination. The landscapes they travel through become a playground that reflects their friendship. Oscar Loeser and Martine Pisani have created a kind of contemporary Western here, in which the protagonists experience their adventures simultaneously in different places. The alternation of these settings creates the final image of a unique landscape and allow us to travel "as far as the eye can hear"...

MARTINE PISANI began her career at the age of 22 in Marseille. In 1992 she founded her own company. Since then she has created many choreographies that have been invited to international festivals. Among them is sans, which was developed in 2000 at the fabrik Potsdam. One of her aspirations is to show as little artificiality on stage as possible. www.ciemartinepisani.fr

OSCAR LOESER graduated as an editor at the Konrad Wolf Film University. Since then he has been active internationally as a visual artist, working with Riki von Falken, Patrick Scully, and Martine Pisani, among others. In 2013, he founded the avk4 collective with Clemens Kowalski, which specialises in stage projections. www.vimeo.com/oscarloeser

With the kind support of the Institut français and the French Ministry of Culture / DGCA.

In August 2020, the choreographer returns to her former residence Potsdam after 20 years to explore the city and its development in the 1to1 performance Fremdgehen. During the Potsdamer Tanztage 2020, video artist Andrea Kiez recorded the very exclusive performance Fremdgehen on film and now presents the film to the public for the first time as part of Made in Potsdam.

How do the body and its environment mutually influence each other? This question forms the core of choreographer SABINE ZAHN's research work. In various participatory formats, she, together with the interdisciplinary collective raumlaborberlin, takes urban space as a field of research and experimentation to explore new relationships between art and the formation of society. www.lovelabours.net

ANDREA KEIZ is a video artist, trained biologist, and dance teacher. She has been working freelance since 2000 and records productions in contemporary dance both in documentary and creative form. She also teaches perception and video documentation of artistic processes at various institutions. www.andreakeiz.de

Riki von Falken's work combines dance, sound, light, and video into a total work of art. Precision and experimentation create a creative maelstrom – lines flicker between light and shadow, sharp and playful. Precise body movements harmonise with the other actors who are on stage at the same time. The fabrik building becomes a projection screen for Die Architektur einer Linie.

RIKI VON FALKEN has been working as a dancer and choreographer since 1981. In New York she was influenced by the works of Merce Cunningham, Trisha Brown, and Jennifer Muller. From 1990 onwards, she created her own works, in which she dances herself and with which she tours internationally. She received the Willms Neuhaus Prize for her work in 2015. Collaboration with other artists is an important part of her work. In Die Architektur einer Linie she works with the visual artist OSCAR LOESER, the musician RALF GRÜNEBERG, the stage designer CLEMENS KOWALSKI, and the dramaturge KATJA KETTNER. www.rikivonfalken.com / www.fuchsundbaer.de / www.kkettner.de

In May 2017, Kathrin Ollroge went on a tour of Brandenburg: She accompanied the choreographer Caroline Laurin-Beaucage and documented her performance Habiter sa Mémoire. Together, through dance and photography, they questioned the relationship and interplay of space, body, and memory in the public squares of Brandenburg's towns and villages.

KATHRIN OLLROGE is a photographer from Potsdam. Her aim is to make the interrelationships of social togetherness visible through photography and the written word. In 2014, she began the interview project Raum für Gedanken (Room for Thought), which has continued to develop until today. In 2018, she was awarded the Federal Cross of Merit for this project. www.raum-fuer-gedanken.com

mit dir. tells of the love between two people as a great feeling that keeps life alive, dominates it, fills it, limits it, and fills it with lightness. It tells of the constant struggle with oneself and one's partner in a limited space, of give and take, and happiness and despair.

GOLDE GRUNSKE trained in stage dance in Berlin and studied choreography in Dresden. Since 2003 she has been working as a freelance dancer and choreographer in Cottbus, where she founded the tanzkompanie golde g. in 2008. She also runs the TanzWERKSTATT dance school there. Her choreographies are regularly shown in Cottbus and in Lusatia. www.golde-grunske.de

With I'm Here, Yasmeen Godder invites people to perform a personal, bodily ritual in the privacy of their home or in the protected space of a dance studio and create a body print with paint on fabric. The idea for this work came about during the time of the first Corona lockdown in Tel Aviv. For the choreographer, it was a reaction to the disappearance of the body in the public sphere and the need to reconnect with it, to feel its materiality while acknowledging its fragility and vulnerability.

YASMEEN GODDER is an Israeli dancer and choreographer. Since graduating from the Tisch School of the Arts in New York, she has toured worldwide as a freelance choreographer. Since 1999 she has been living and working back in Tel Aviv and devotes her research to alternative forms of movement as well as composition and performance formats, which above all include participatory elements and involve the audience directly in the physical and emotional experience. www.yasmeengodder.com 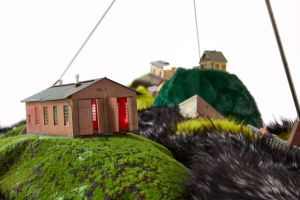 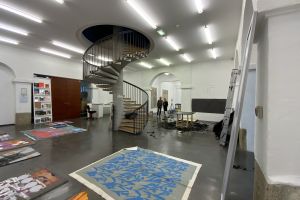 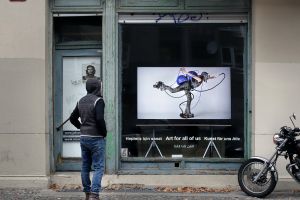 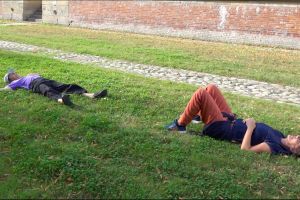 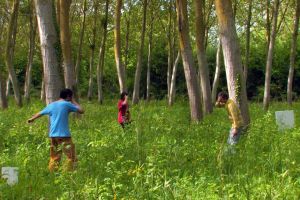 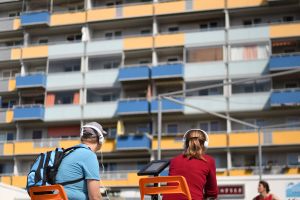