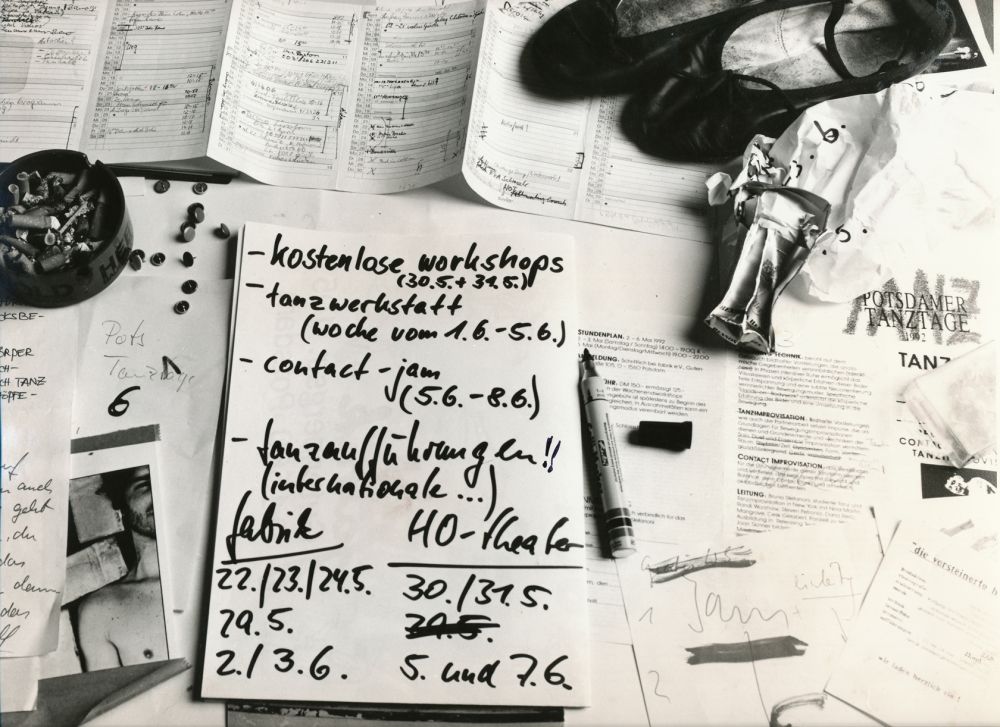 In former East Germany, Potsdam was a place where the alternative scene was particularly well developed. After the breakdown of the wall, a large squatter scene emerged in the city center, which was left undeveloped by the GDR government. One of those squats was fabrik (meaning factory), in a derelict brewery in Gutenbergstrasse 105. The initial challenge was to create a center for young talents and bring dance and music from abroad. At the same time, they founded the dance-theatre company fabrik Company, whose works were presented at Gutenbergstrasse and toured in neighboring cities. The first subsidies for maintenance received from the State of Brandenburg allowed the association to pay for technical equipment and organize an international contemporary dance festival, the first “Tanztage,” which has been repeated every year since then.

Founded in 1991, fabrik Potsdam has moved three times, reflecting the difficulties for independent artistic initiatives to get recognition from public authorities. In 1993, the association was forced to move from the Potsdam city center and the residential neighborhood to the lonesome Schiffbauergasse on Tiefen See Lake. This industrial and military area having just been abandoned by the Russian military forces, the fabrik relocated in the “Fischhaus,” and then the Reithalle B. Nevertheless, the members of fabrik Potsdam remained faithful to their philosophy: “The more stubborn one is, the more energy one expends over the years, the more attention one receives, although sometimes reluctantly.”

Over the years fabrik Potsdam was able to get international recognition thanks to several projects that it initiated. In 1995, fabrik organized the improvisation project Telling Times, uniting 20 dancers from the East and West for three months. This event allowed fabrik to let its artistic forces loose again and gain public recognition. From 1999 to 2008 fabrik Company toured intensively with awarded productions. In 2001 fabrik set up a stage at Edinburgh Fringe Festival under the name Aurora Nova, which established it as an internationally acknowledged presenter for contemporary dance and new circus productions. As part of the nationwide dance promotion campaign Tanzplan Deutschland initiated by the German Federal Cultural Foundation, fabrik received support from 2006 to 2010 for an international residency and research program: Tanzplan Potsdam. With up to 15 residences a year, fabrik has become an important international production location for dance. In 2018, fabrik launched the project Explore Dance - Network dance for young audience in cooperation with k3 Hamburg and Fokus Tanz Munich, a three-year program for the production of dance pieces for children.

Fabrik has managed to develop in its years of existence an artistic project recognized by the Cultural administration, the inhabitants of Potsdam and the international dance community. fabrik has received support from the City of Potsdam and the State of Brandenburg, as well as the Federal Culture Foundation, which enables it to develop its program of performances, workshops, productions, and education projects. Cooperations and networks built up over the years enable fabrik to offer a wide program for the promotion of Contemporary Dance.

Jack Tinker - Spirit of the Fringe Award 2001 for Wolfgang Hoffmann

1990 Foundation of the fabrik Potsdam by Sven Till, Wolfgang Hoffman, and Zap among others at Gutenbergstrasse 105

1991 April: official registration of the association fabrik e.V. / First support by the state of Brandenburg / First edition of the Potsdamer Tanztage

1996 Expansion of the Reithalle B as a stage for fabrik Potsdam / Relocation to the Maschinenhalle, the current venue of fabrik Potsdam

2012 First edition of the festival Made in Potsdam

2019 Participation in the Bauhaus100 anniversary with the Potsdamer Tanztagen

2020 First edition of the Art and Climate Festival

Across the Glienicker Bridge, the Schiffbauergasse wasteland bears Potsdam’s political and industrial memory. Located by one of Potsdam's largest lakes, this former industrial and military area enclosing various derelict buildings provides exceptional spaces for indoor and outdoor scenographic explorations and artistic experiments. Since 1998, fabrik Potsdam has occupied one of the largest buildings in the area, the Maschinenhalle, and since 2008 a second location called Studiohaus with four dance studios. From 2000 to 2008, the City of Potsdam, owner of the Schiffbauergasse area, carried out an urban rehabilitation program for the site, partly funded by European structural funds, and involving the reconstruction of a new City theater and the renovation of the existing buildings, including the one which houses fabrik. Today, the former isolated and abandoned area is a dynamic and innovative cultural point known as the Kulturstandort Schiffbauergasse with numerous cultural actors like the City theatre Hans-Otto-Theater, Waschhaus, T-Werk, Theaterschiff, Museum Fluxus+, Frauenzentrum und further associations.