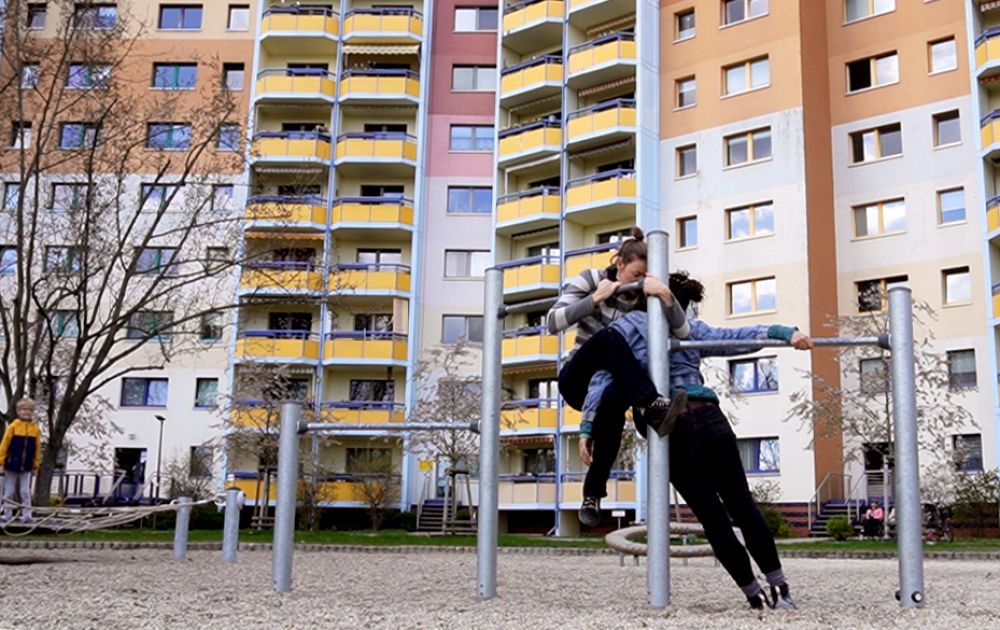 Lieu de passage is the name of the research project of this year's Studio Québec resident artists, the dancer and choreographer Angélique Amyot and the visual artist Gabrielle Bélanger.

In the encounter of two disciplines, the artists embark on an open exploration of a common territory that is new to both of them and on a search in micro- and macrosystemic spheres. In the process, their own experiences, artistic biographies, inner maps and perspectives of their own geographical and socio-cultural origins flow into the research, as do impressions from their time in residence in Potsdam and Berlin. In the sounding out and deepening of movement, in spontaneous composition and graphic trace in performance art and video, Lieu de passage for Angélique Amyot and Gabrielle Bélanger denotes the search for unknown terrain for joint dialogues. In the process, they also explore the approach of shaking, using the body sometimes as a structure, sometimes as a support. Through dance improvisations with elements from children's games, they conquer public spaces and create situations of encounter between themselves, the space and casual observers. Finally, they translate the bodywork into small scenes in which hands meet for the duration of a dance.

Studio Québec is a residency programme for artistic exchange in the field of choreography between Germany and Québec. Each year, Canadian and German artists are invited to spend several weeks in residence in the other country. Studio Québec is a cooperation between fabrik Potsdam, Conseil des Arts et des Lettres du Québec and the Goethe-Institut Montréal with the support of the State of Brandenburg and the City of Potsdam.

Angélique Amyot is a dance artist. She holds a Bachelor's degree in Social Work (Quebec, 2012) and a certificate in Psycho-Pedagogy of Danced Movement (Paris, 2014). In her creations and interventions, she values openness to the other, cultural exchange and the mix of disciplines. In 2020, she created her first solo work Aulavik, lieu de passage as a choreographed journey on the concept of territory. She is a member of the multidisciplinary collective Interstices (Réparer l'apocalypse), the collective Les femmes qui s'invitent (Les muses des parcs) and has worked with several companies in France and Québec (Arielle et Sonia, Entr'actes, Le CRue, la Mangrove, Papillon blanc danse). She uses her experience from dance therapy in programmes and projects for cultural mediation in community institutions e.g. at the Centre des femmes de la Basse-Ville and l'Arche l'étoile or the Centre Jacques-Cartier. Since 2017, she has led the Sessions d'improvisation de l'Artère (SIA), where professional artists work around spontaneous compositions.

Gabrielle Bélanger comes from the Mauricie region and has an academic background in visual arts and social work. She is currently studying sexology. As an active member of Engramme, she develops numerous research and cultural mediation projects with the centre. She is the artist behind La Carriole (2018), the mobile screen-printing studio she uses to engage people on the streets of the capital. She is a multiple CALQ and Première Ovation grantee and has completed residencies in various cities and artist:ing centres (La Bande vidéo, Atelier Imago) for more than five years. Her work is disseminated through solo exhibitions (Engramme, Presse Papier) and through interventions in outdoor spaces away from buildings or performances. In 2021, she was nominated for the "Personnalité art et culture en Capitale-nationale" award. Her prints are part of the collection of Engramme, the Bibliothèque Gabrielle-Roy and the BAnQ.