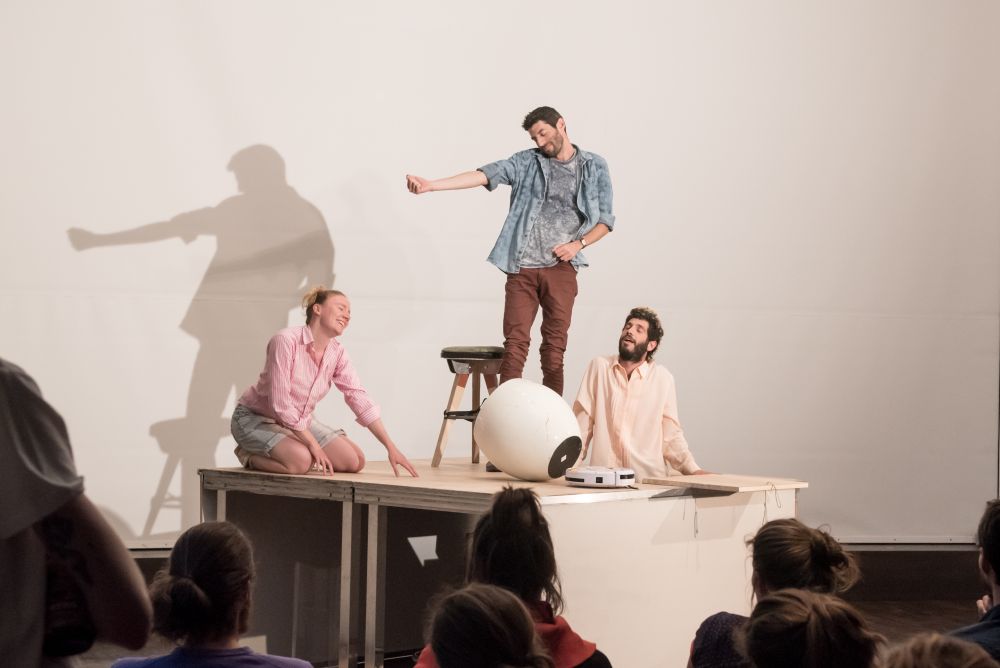 Zipp, Krap, Bang, chhhhh... A huge wooden box! Around, inside and on top of it a rhythmic and sonorous story unfolds. There you discover a hand, here you see a head. Has it disappeared again? What is hidden in the box? And what exactly unfolds out of it? Movements and noises repeat themselves, build on each other and disappear again. And yet before you notice it, the rhythm has taken us into another loop. Clément Layes is developing the first pop-up in explore dance - Network Dance for Young Audiences. The pop-up sees itself as a mobile piece that can suddenly appear both in classrooms and in public spaces. With ONONON, the choreographer concludes a series of performances in which he explores appearance and disappearance and the resulting rhythm. Clément invited children from Freie Schule Potsdam to enter into an artistic dialogue with him and his team and to exchange thoughts and ideas.

By Clément Layes
With: Cécile Bally, Nir Vidan
Mentoring: Gabi Dan Droste
Photo: Barbara Antal
Duration : approx. 30 minutes
A production of explore dance – Network dance for young audience, a co-operative project of fabrik moves Potsdam, Fokus Tanz / Tanz und Schule e.V. München and K3 | Tanzplan Hamburg. Funded by TANZPAKT Stadt-Land-Bund with the support of the German Federal Government Commissioner for Culture and the Media, the Ministry of Culture and Media of the Free and Hanseatic City of Hamburg, the Municipal Department of Arts and Culture Munich and the BLZT, financed by the Bavarian Ministry for Arts and Education, as well as the city of Potsdam and the ministry for science, research and culture of the federal state of Brandenburg.