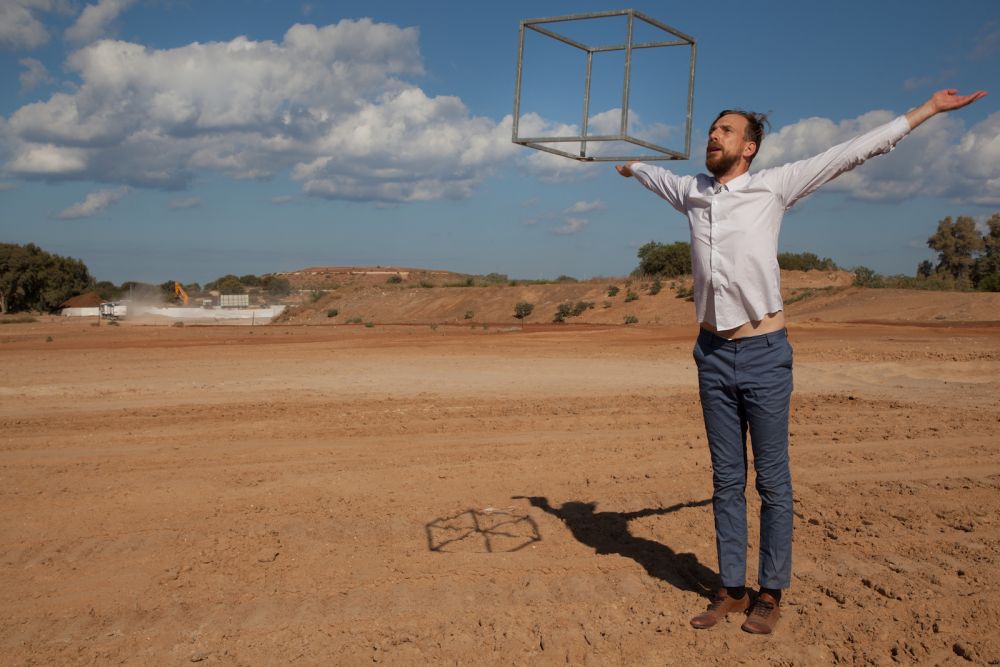 Sylvain Huc’s desire to work on the topic of ‘night’ is linked to his fascination with this time of day. To think of the night is to think of the way in which obscurity transforms our perception and our relation with others. With this new project he continues his investigations of the body as subject, object, matter, and multiplicity of constructions. NUIT is a pretext to explore the elasticity of time.
Following his university studies in history and art history, Sylvain Huc discovered contemporary dance and completed the training program of the CDC (centre for choreographic development) of Toulouse in 2003. After several years working as a dancer for various choreographers he became artistic director of Cie Divergences in 2014. He now runs his own company (Cie Sylvain Huc) and will be an associate artist at the CDCN of Roubaix (Le Gymnase) from 2020 to 2022.

Hermann Heisig’s 7 spells (working title) evolves a practice of the simultaneous, partly absurd connection of voice and movement developed in his last solo work singing machine (2019). The central idea is to conceive of the voice as the soundtrack of the body, and at the same time the body as the materialization of the voice.
Hermann Heisig lives and works as a choreographer and performer in Berlin. As a dancer he has worked for Martine Pisani, Meg Stuart/Damaged Goods, Pieter Ampe, Thomas Lehmen, Begum Erciyas, and Corinna Harfouch, among others. From the autodidactic beginnings of his choreographic interest at the end of the 1990s in Leipzig, Hermann Heisig developed an idiosyncratic movement vocabulary that defies efficiency and is sparked by elements of loss of control, as well as voluntary and involuntary comedy.

ARA! ARA! is the symbol of a rising power that has chosen a bird as its symbol. Not a majestic and fearsome raptor like the eagle, an animal often used as a heraldic symbol of power, but instead a bird that communicates fun and quietness by becoming an exotic icon: the parrot ARA. As the second part of a diptych started with AeReA, ARA! ARA! continues to investigate the symbolic power of the flag. The word ARA reveals a second meaning that alludes to the ancient place of sacrifice.
Ginevra Panzetti and Enrico Ticconi both graduated from the Academy of Fine Arts in Rome and have been working as a duo since 2008. Their artistic research interlaces dance, performance, and visual art. Exploring themes related to the historical union between communication, violence, and power, they draw on ancient imagery,, creating hybrid figures or images between history and contemporaneity. 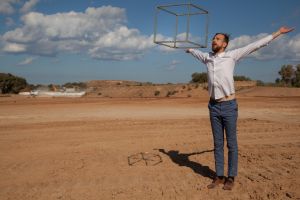 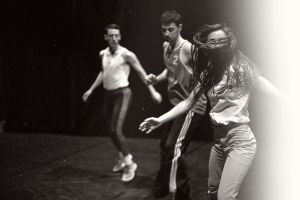 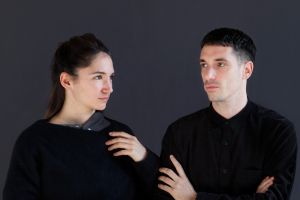 With friendlich support by Institut français, the French Ministry for Culture /DGCA and the City of Potsdam. In cooperation with Festival Tanz im August.